Aslan recently visited Uni Vets Camden as his owners were concerned when blood and black spots appeared around his mouth. The spots and blood appeared about three weeks ago, and before this, Aslan had never had any health concerns.

On examination, his lip edge was inflamed, moist and thickened. There were scabs and black marks around his mouth and chin accompanied by an unpleasant smell. The only way to correctly diagnose the cause of Aslan's irritation was to take a sample to be tested by our onsite clinical pathology lab. Our Vets worked closely with our highly experienced senior pathologist who provided the assessment that Aslan has Eosinophilic Granuloma Complex (EGC).

What is a Granuloma?

A granuloma is a solid grouping of inflammatory cells coming together in a lump or solid structure.

What is an Eosinophil?

An eosinophil is a type of white blood cell that is commonly associated with allergic responses or with parasitism. Eosinophil counts will go up on a blood test when a pet has fleas or worms or when an allergy is flaring up. They are part of the immune system and are on patrol for biochemical signals from tissue (calls for help, if you will) telling them that a parasite has invaded. Eosinophils home to the signal and release chemicals to attack the parasite. Unfortunately, they can be tricked into thinking that some sort of benign materials (pollens, dust, etc.) are attempting invasion. In this instance (allergy), they release their inflammatory chemicals inappropriately, creating the sensations of itching, swelling, redness and other symptoms of allergy.

The eosinophil has a characteristic appearance under the microscope due to the pink staining granules as seen in the micrographs here. 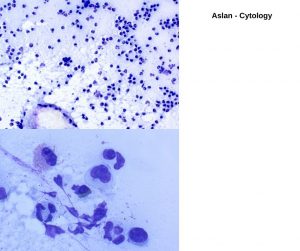 When vets “take a sample for cytology”, this is the sort of thing they are looking for to help understand what could be causing the signs on the pet. The pink staining granules contain assorted toxins and biochemicals designed to attack an invading parasite. These granules can be thought of as small bombs directed against large invading organisms such as worms.

So what is Eosinophilic Granuloma Complex?

Given the above information it would seem logical that an eosinophilic granuloma would be a granuloma made up of eosinophils; however, the

These conditions are felt to most commonly have an underlying allergic basis though it is not always possible to determine what that allergic basis might be. Aslan has the classic eosinophilic granuloma causing a swollen lower lip and chin.

What Exactly is Happening to these Cats?

The eosinophilic granuloma complex represents a disorder of eosinophil function. The eosinophil’s real job is to attack parasites. It is designed to be attracted to areas where parasitism is occurring and once there it releases biochemicals to destroy the invading creature. In cats with eosinophilic granuloma complex, eosinophils are called to the site of an allergic response and the biochemicals released cause damage to local collagen but they do not point to a specific cause. The most common cause is some kind of allergy, and treatment is generally about trying to determine the specifics of the allergy and suppress that reaction.

If there is any way to determine the underlying cause of the lesion, that would be the best approach but determining what the cat is allergic to is often easier said than done and takes time. For more immediate results while other issues are investigated, corticosteroids are frequently the "go-to" therapy. Some lesions respond to antibiotics without the use of steroids. The eosinophilic granuloma is an incompletely understood condition. For now, it is best to view it as an extreme symptom of another underlying skin disease.

Aslan was prescribed with antibiotics along with gentle cleaning of the area. He will be back for a recheck in a few weeks and we will keep you posted on his recovery!

View all posts by: admin+